Australia have confirmed their semifinal spot while five other teams – New Zealand, England, Bangladesh, India and Pakistan were in strife for a place in the top four

The endeavor ahead of Bangladesh to meet their ambition of playing the semi-finals of the ongoing ICC Cricket World Cup 2019 is simple – win the two remaining matches and leave the rest for the fate to decide. The Tigers in seven games that they have played so far have secured three wins against South Africa, West India and Afghanistan respectively while shared the spoil with Sri Lanka in the match that was abandoned due to inclement weather. And to keep in contention, Bangladesh need to ensure wins in their games against India, on July 2 and against Pakistan on July 5.

As far as the points table is concerned, the 10-tournament with a team facing each of the participants once in league stage, cannot have asked for a better build up. As of Sunday, June 30, Australia have confirmed their semifinal spot while six other teams- New Zealand, England, Bangladesh, India, Pakistan and Sri Lanka were in strife for a place in the top four. 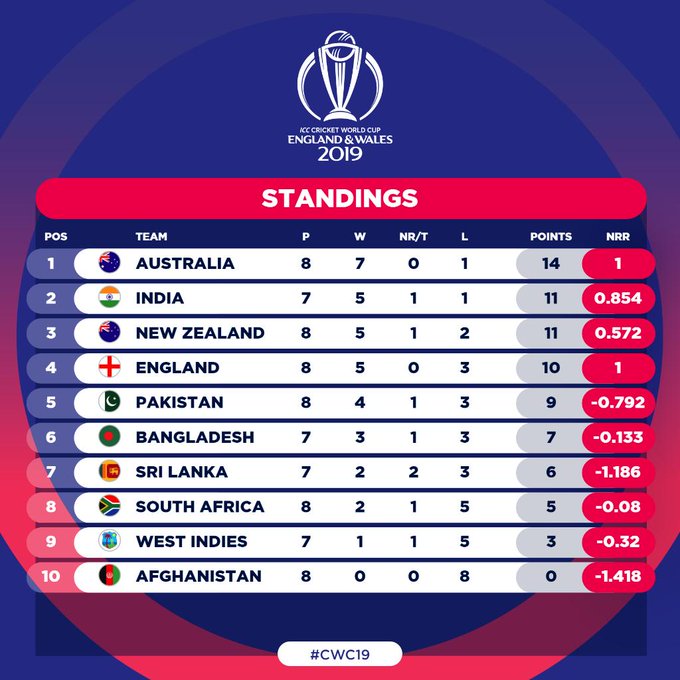 Bangladesh – win the two matches and rely on New Zealand to win against England on July 3.

India– India are all but qualified for the semis. All they need is a win in their remaining two matches, against Bangladesh and Sri Lanka. Even if they lose they will go through considering England losing to New Zealand or New Zealand stay under them in run-rate as the Kiwis will end with 11 if they lose against the hosts.

New Zealand – With 11 points in 8 matches, the Kiwis are all but confirmed for a berth in the semis. If they lose against England they will remain on 11 and have to hope Bangladesh and Pakistan, who have inferior net run rate to them, do not leapfrog them in run rate even if either of the side reaches 11 by winning their remaining matches.

England – England have their fate in their own hands now thanks to their morale-boosting win against India, the side that was unbeaten before Sunday, as the hosts have 10 points now. Their win in the remaining match against New Zealand will guarantee them a spot in the top four. Even, if they lose, they have to hope Bangladesh lose to India and beat Pakistan.

Pakistan – the side is moving ghostly having maintained a pattern as it is to the one in 1992, the year they lifted their only World Cup title till date. On Saturday, Pakistan had a narrow escape against Afghanistan to keep berating in the tournament and now look forward to their last game of the league, against Bangladesh and also pray England do not finish winning their last game in the phase.

Bairstow scores a century to put England on top

3 ways to ensure innovation transforms the lives of the next...

Netflix is officially making a show based on Neil Gaiman’s ‘Sandman’...

Elon Musk’s Boring Company is cranking up its hiring machine

Waymo is now allowed to transport passengers in its self-driving vehicles...

Youth News Today is a news portal for today's youth. We are a caterer to the youth population throughout the world, giving them a voice of reason and a platform to share knowledge and spread awareness. Get a dose of updated news on career, lifestyle, sports, entertainment, business, and politics from us every day to stay ahead.
Contact us: youthnewstoday@gmail.com